Richard Baris: Primaries prove without Trump, GOP is in trouble

Richard Baris, who's the most reputable and accurate pollster, has been screaming from the rooftops that if Trump is not engaged, Republicans are in trouble.

The commie media is spinning the NY special elections as wins for Democrats, when the reality is Republicans have no reason to turn out:

Baris did note turnout in this special election was down by about 200,000 votes from the historical norm. Baris says New York’s 19th Congressional District usually draws about 350,000 votes. For example, in the 2020 general election, this same district drew a total of 352,771 votes. But Tuesday evening, only 128,991 people turned in their ballot to vote. Baris says this is a sign the GOP is struggling to move the needle without former President Donald Trump on the ballot.

“What this tells me in New York 19 is that without Donald Trump involved in some of these fights,” Baris explained. “Whether he is trying to beat a more establishment candidate in a nomination, or his candidate is just favored and he’s, he’s there driving excitement up, Republicans are having a hard time on their own getting people excited.”

For those races without Trump, in any state, there's no Republican energy:

Baris says the big takeaway from the race is that the GOP is struggling to turn out the vote without the 45th president.

“The big picture for me is that without Donald Trump on that ballot, they have a hard time bringing out lower propensity working class people who are not sold on the Republican party,” said Baris. “This idea of moving on from Donald Trump, [the voters] not ready to do that yet. It’s clear.”

In his show from Wednesday, Baris dives deeper into the various races in various states, and even makes the case that those thinking DeSantis carries the same turnout energy are wrong.

One common retort is the Glenn Youngkin victory, where Trump didn't show up to campaign.  Baris slaps that myth down by making the point that Trump endorsed Youngkin, and he would not have had the MAGA turnout he did without Trump's support.  From his Wednesday show:

...New Jersey it was a low turnout folks. That was not a great turnout. In Virginia where he was intimately involved, and more so --he had surrogates-- he had his entire surrogate team doing bus tours with John Fredericks and running all over from the mountain range in the Shenandoah to the D.C. suburbs, there was a lot going on in the ground. That's why Glenn Youngkin, or a big part of why Glenn Youngkin got such a working-class turnout. It's getting painfully obvious that Donald Trump's fights -- the MAGA fights -- are driving record turnouts, and when he doesn't get involved, like in New York, like in California, turnout is abysmal.

In Florida, Latino voters aren't interested if there's no Trump:

...and looking at that concerns me a little bit for the Republican coalition going forward. Without Donald Trump it is very clear that there are a lot of Hispanic voters in South Florida who are just not sold on voting Republican for the sake of voting Republican. They stomped out for Donald Trump in 2020 and they pulled the lever filled in the bubble for people like Maria Salazar in FL-27 because he was there and they did it for him, but Maria Salazar's got a fight on her hands in case you haven't looked at the turnout numbers.  She better win independents by five because -- this is the crap the Republican establishment throws that pisses me off -- she's a journalist who's Hispanic so she's gonna just romp it with the Hispanic vote.

A billionaire white guy -- old white guy -- from New York City, raised in Queens, New York, excites Hispanic voters better than her; and it's a legit concern at this point. So for all the people who are "time to move on from Donald Trump", good luck, because here's what you don't understand -- and when David comes on in the next hour we're gonna talk about it -- here's what you're not understanding: a lot of those voters that you're so pissed about losing, in the burbs that you blame Donald Trump for, they're not coming back.  The highly educated, overly educated...

...Miami-Dade, Broward, Palm Beach, these areas that were just so stubborn, but I always looked at Miami-Dade, like they don't agree with Democrats, they don't, they're just not hearing it -- this is prime [for Republicans].  Starting at the local level like that, and fighting a values fight like that, is a good damn start [context being school board wins]. I have been telling people, 2024, if Trump is the nominee, he's carrying Miami-Dade.

I was bullish on DeSantis' ability to do so; I'm a little bit less so after tonight. Can he get close? Yes, yeah yeah, he may be able to do it. He may, but there are definitely voters missing from South Florida last night that vote for Trump and won't vote for anybody else.  They're white, they're black, they're Hispanic -- in south Florida they're real Hispanic -- and Republicans are not getting them out. DeSantis did better with them in 2018 than the polls suggested, he did, but the point of a trend is to keep it going, keep it going...

That's quite a reality check.  Baris makes more points, and has been since the Arizona primaries, and the numbers make it clear: the GOP is in trouble without Trump. 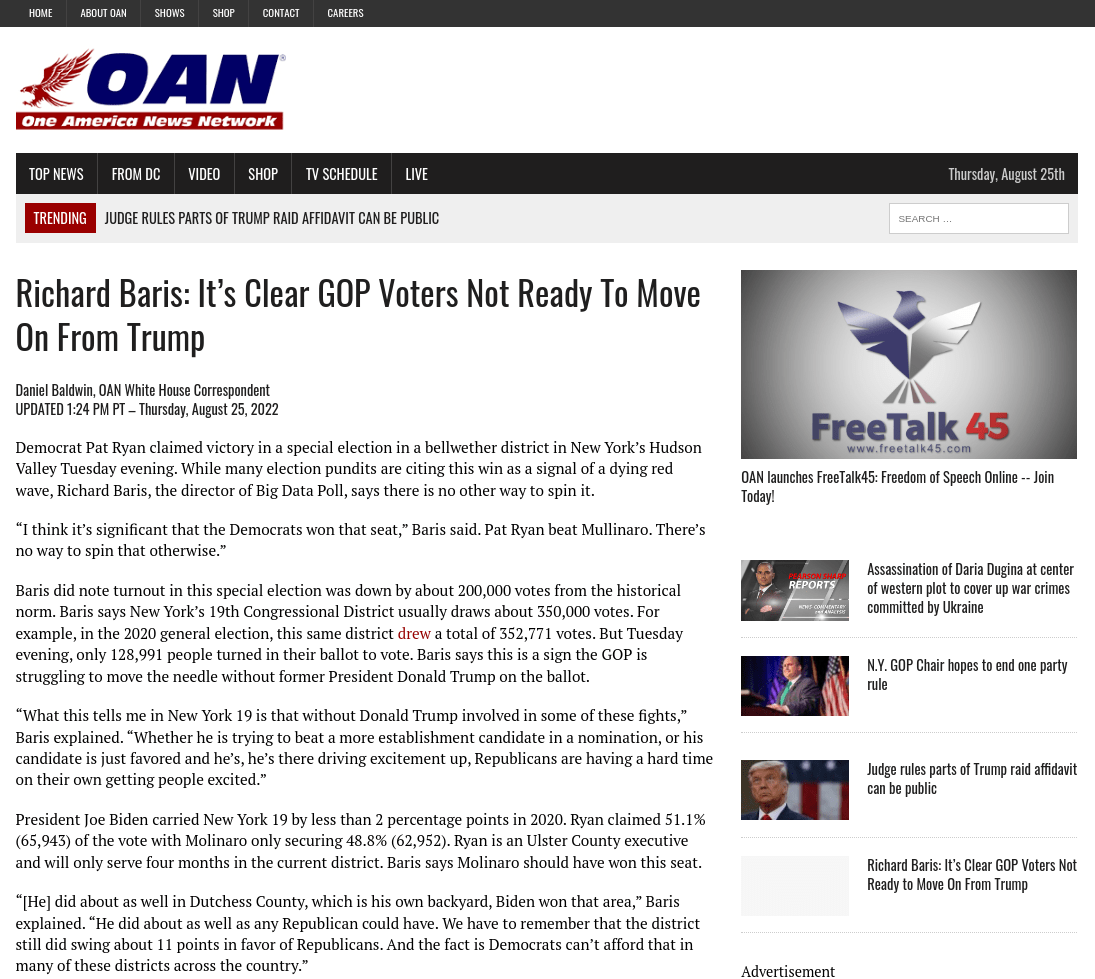