This is pretty big.

Konnech CEO Eugene Yu was arrested today in Los Angeles County  in connection with “theft of personal data.”   The alleged stolen data belonged to poll workers and was the subject of TrueTheVote’s “PIT” in Arizona last August, where Catherine Engelbrecht and Gregg Phillips singled out the company.

During the PIT in August, Phillips and Engelbrecht had alleged they were cooperating with the FBI in Michigan about data being sent overseas by this company.  The investigation quickly started to turn on them after the FBI started to distance itself from the investigation.

The theft of data only impacted the election workers, according to the Los Angeles District Attorney George Gascon.  The LADA seized hard drives and other digital evidence from the Michigan software firm with the assistance of Meridian Township Police in MI.  The LADA is seeking Yu’s extradition to Los Angeles.

In a live chat released on Monday, Catherine Engelbrecht and Gregg Phillips, appeared together on “truethevote.locals.com” to discuss their 15-month involvement with what was characterized to them as a “counter-intelligence operation” with the Federal Bureau of Investigation into American election company Konnech Inc.

Konnech, which is based out of East Lansing, Michigan, builds software to manage the poll workers, poll locations, campaigns, assets, and supplies necessary to run elections in the United States, Canada, and Australia.

In January 2021, Phillips said that the cyber analyst he had been working with encountered an “oddity in some of the URLs” such as vote4la.com, vote4detroit.com, and vote4boston.com, which Konnech’s “PollChief” software application used to gather personally-identifying information about poll workers.

Using Binary Edge, a software product companies use to identify and assess the risk of cyber breaches, “We began to look at where do these URLs actually resolve to. We found that most of them resolve to one IP address and that IP address — the URL resolved in China,” Phillips said.

“What we also learned in our review, apps.konnech.com [.net], resolved into this same URL in China, meaning that the application itself was residing in China,” he continued.

“In Binary Edge, you can figure out what type of database they are using, their database port, and all the different services offered by ports in this particular application living in China. It turned out that not only did it live there, but they left the database open.”

This database “stored the personally identifying information of over a million Americans,” he emphasized.

Engelbrecht and Phillips decided that “this was a major national security risk” and immediately took the information to the FBI. 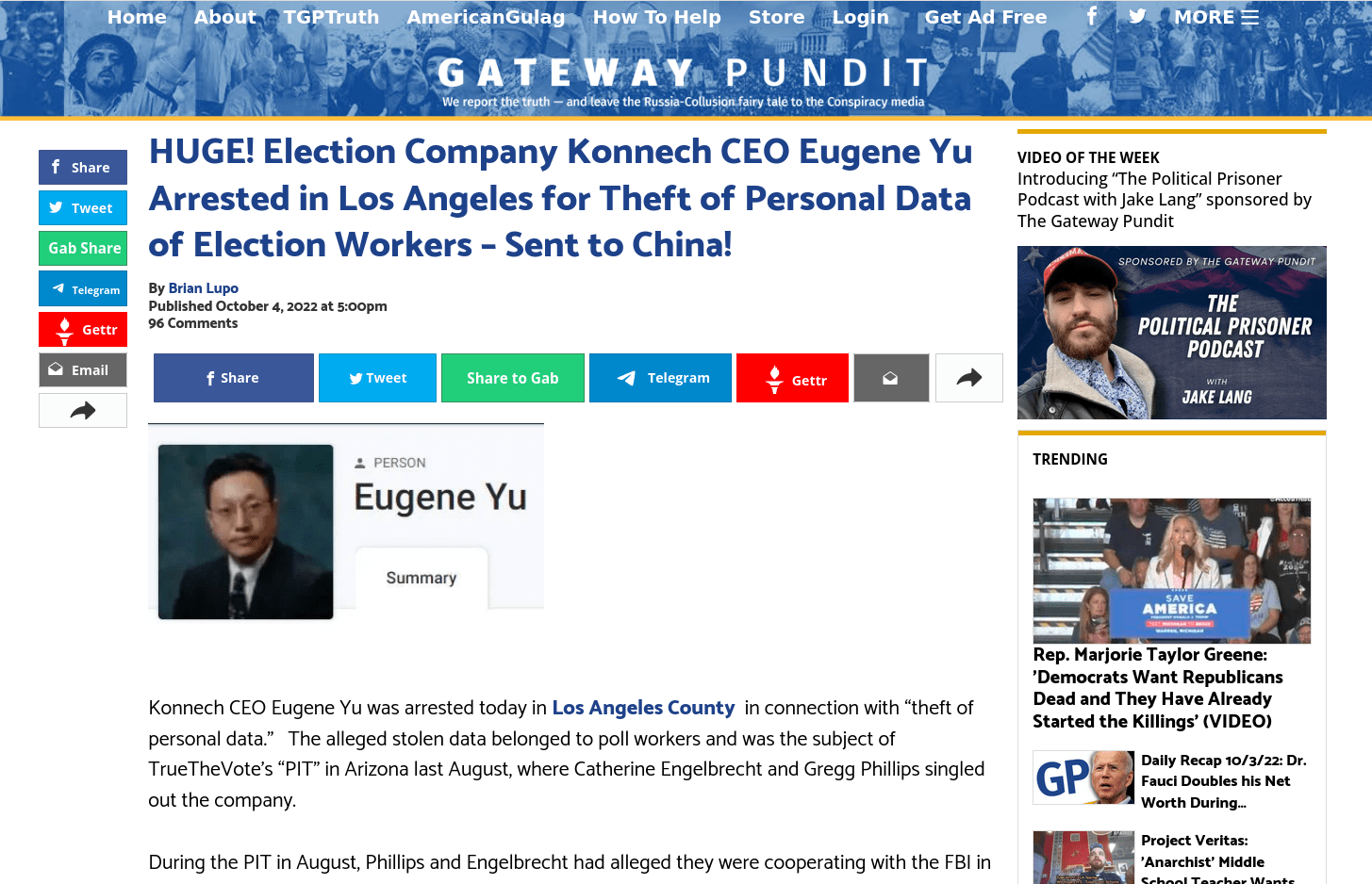